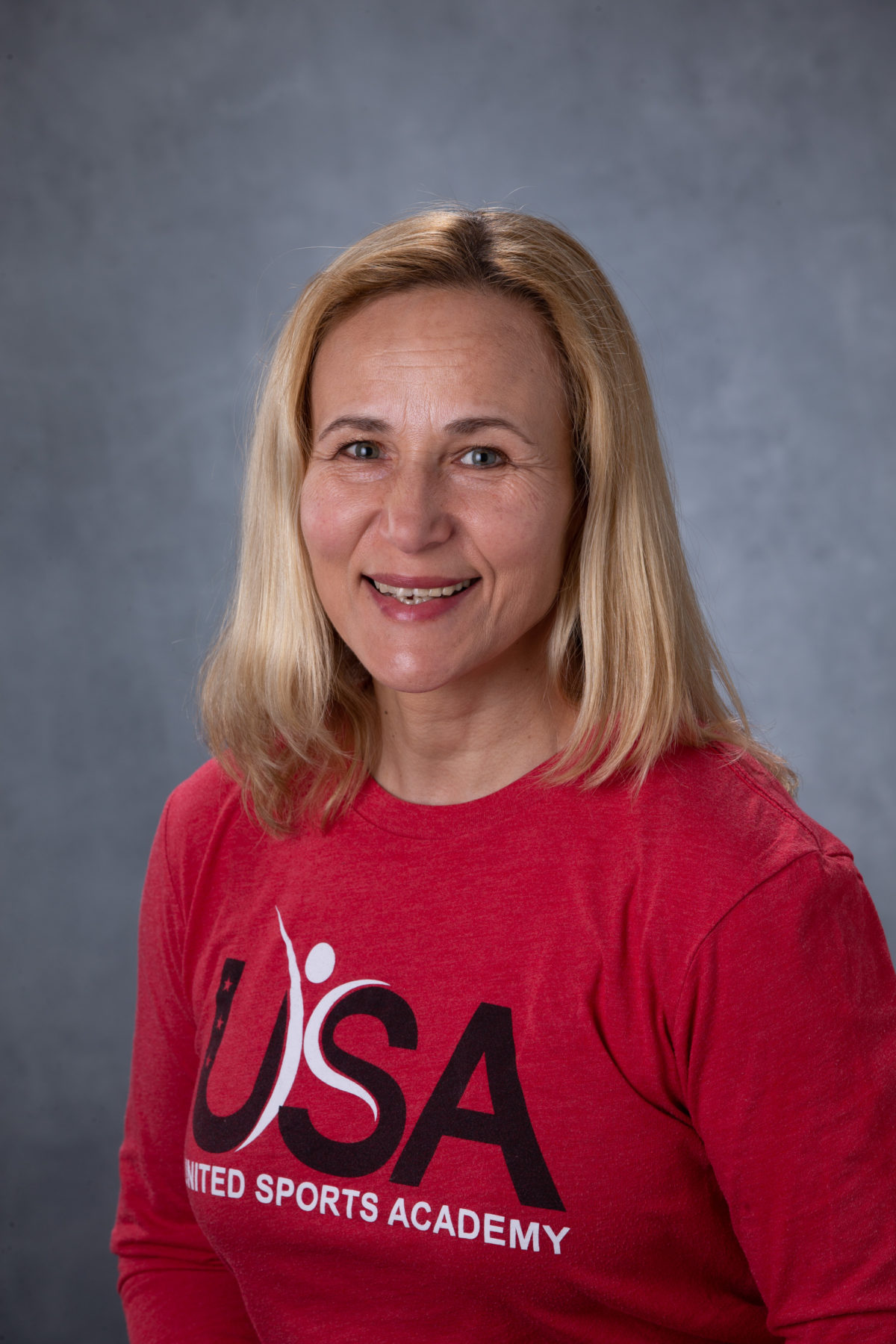 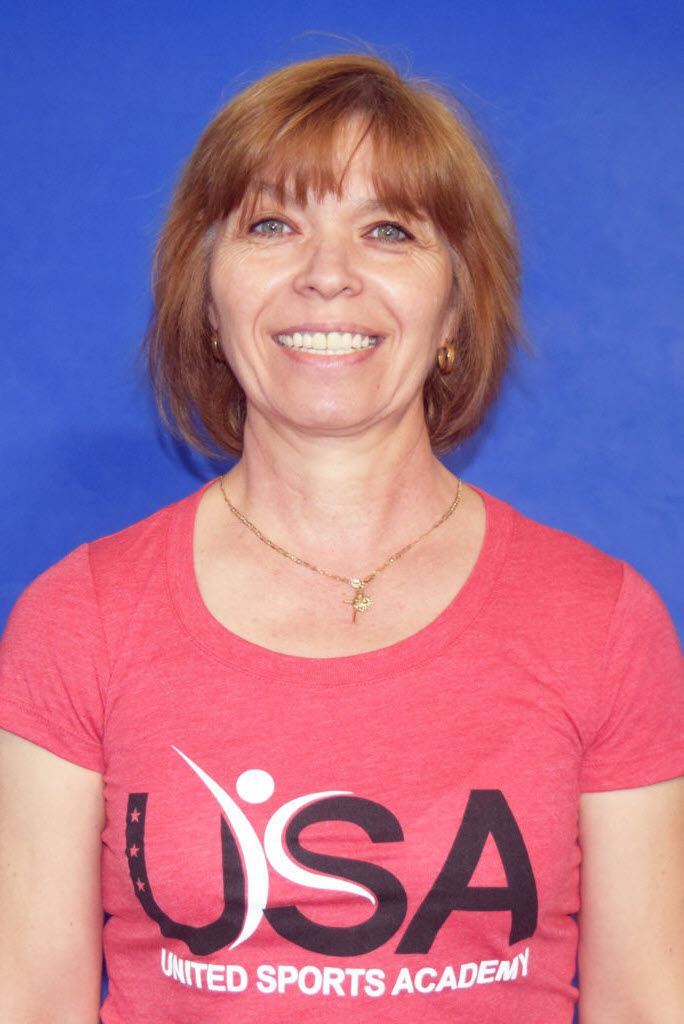 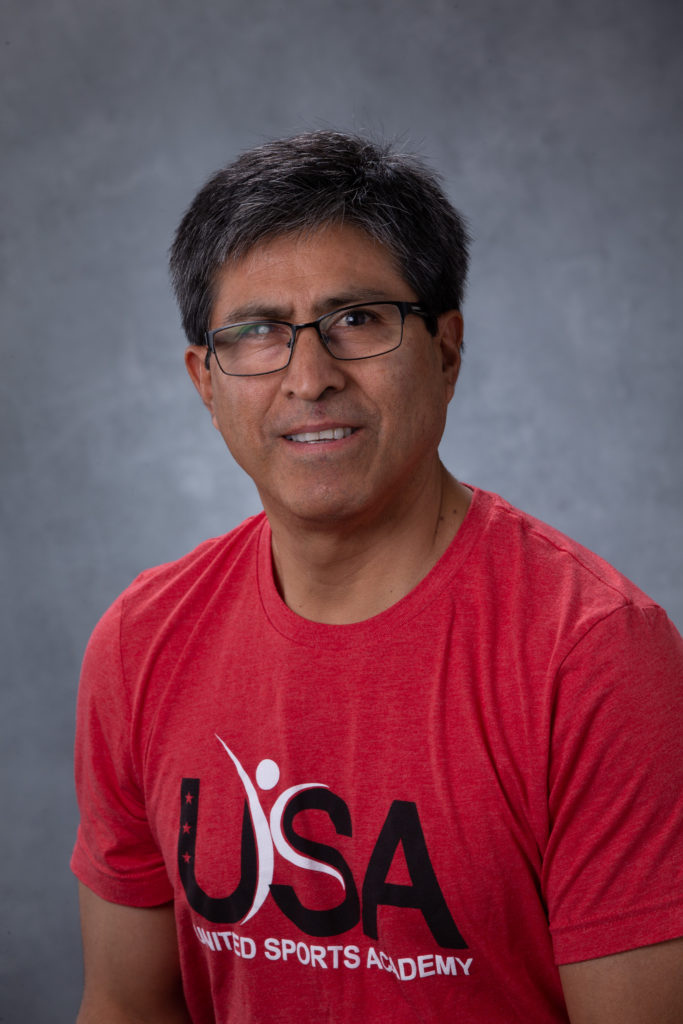 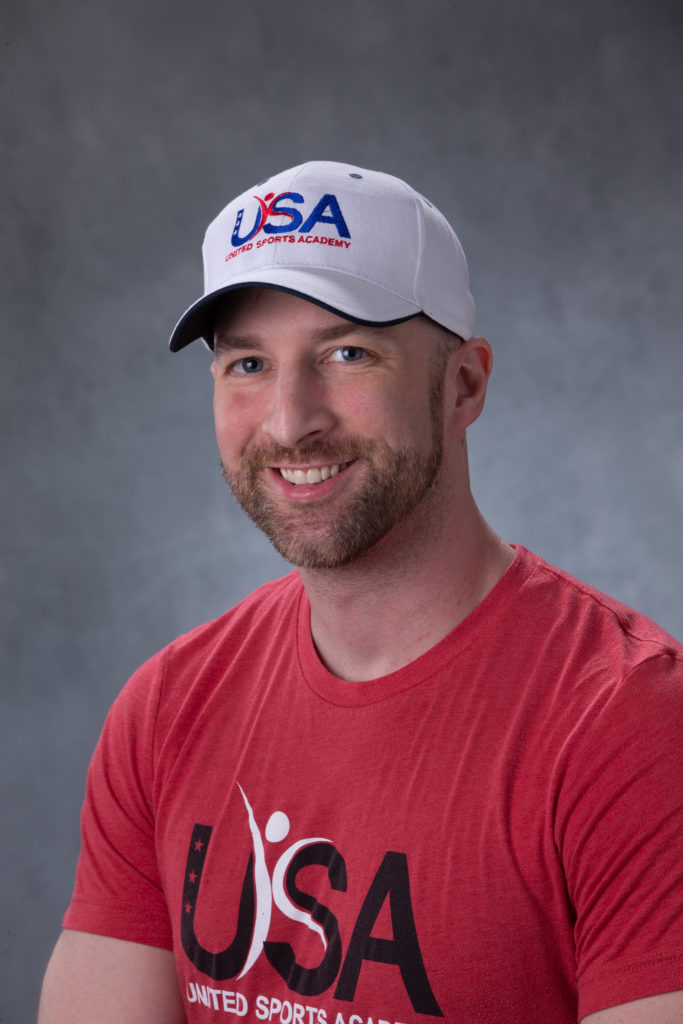 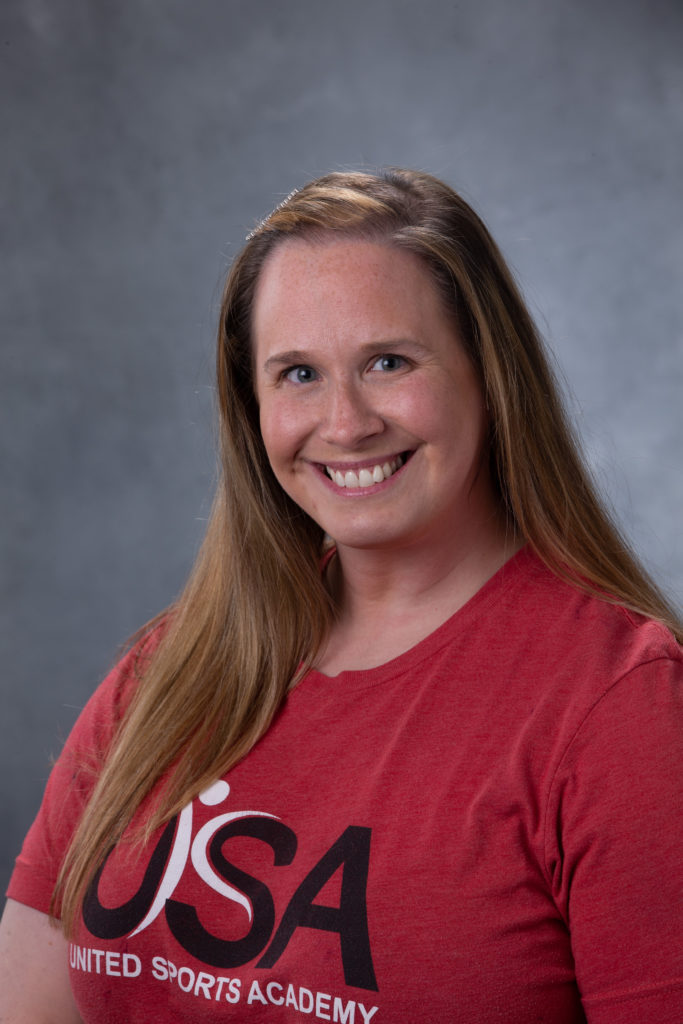 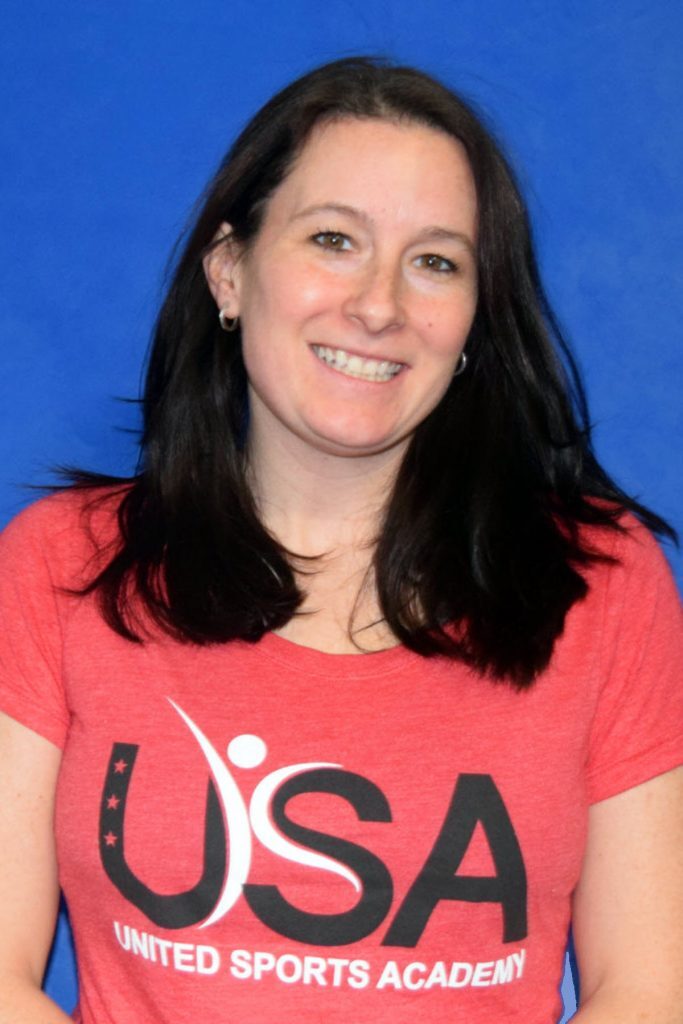 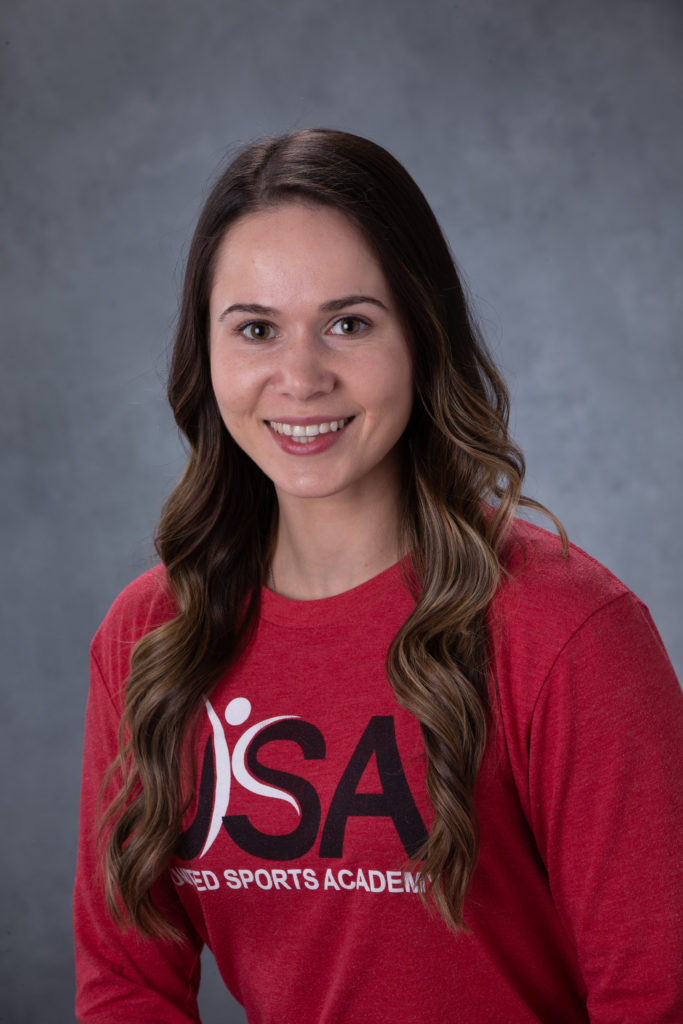 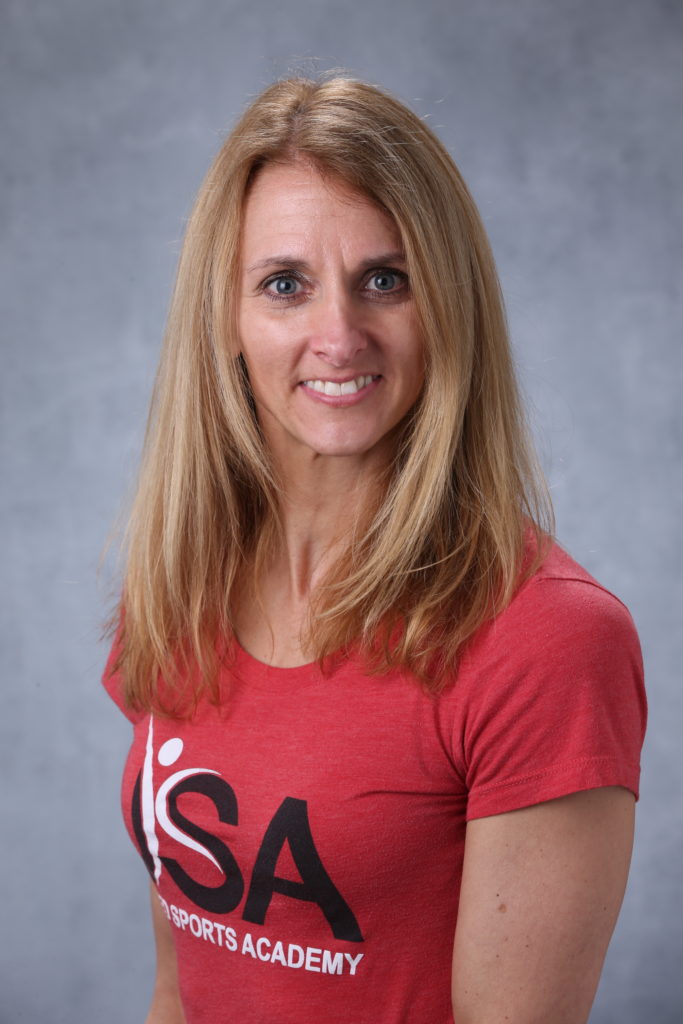 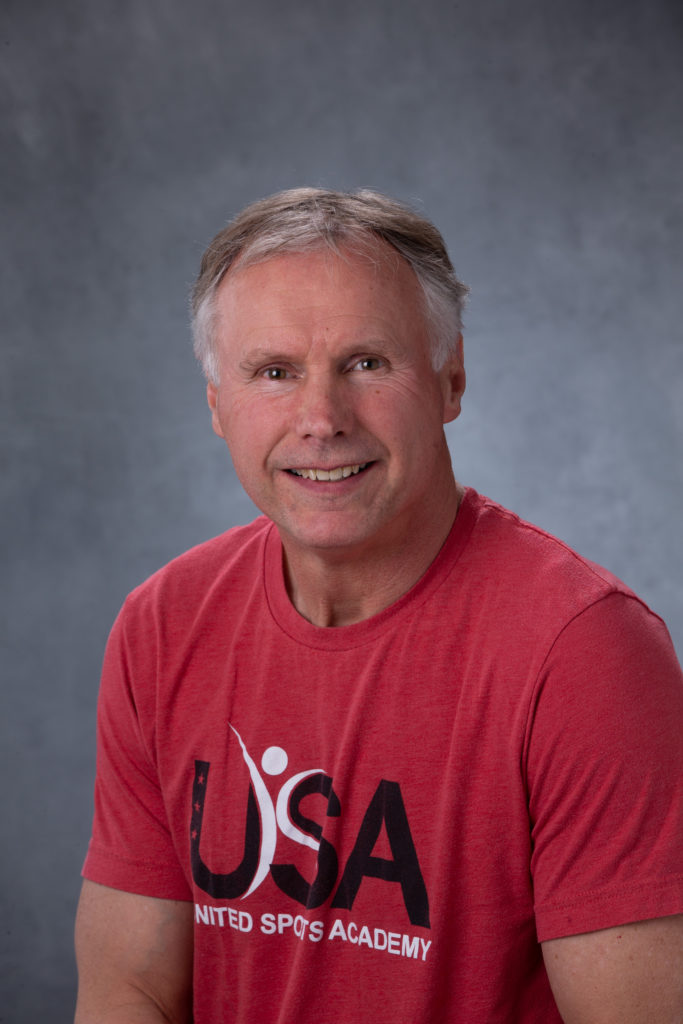 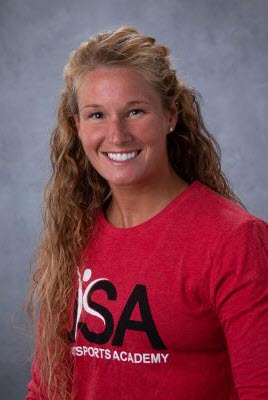 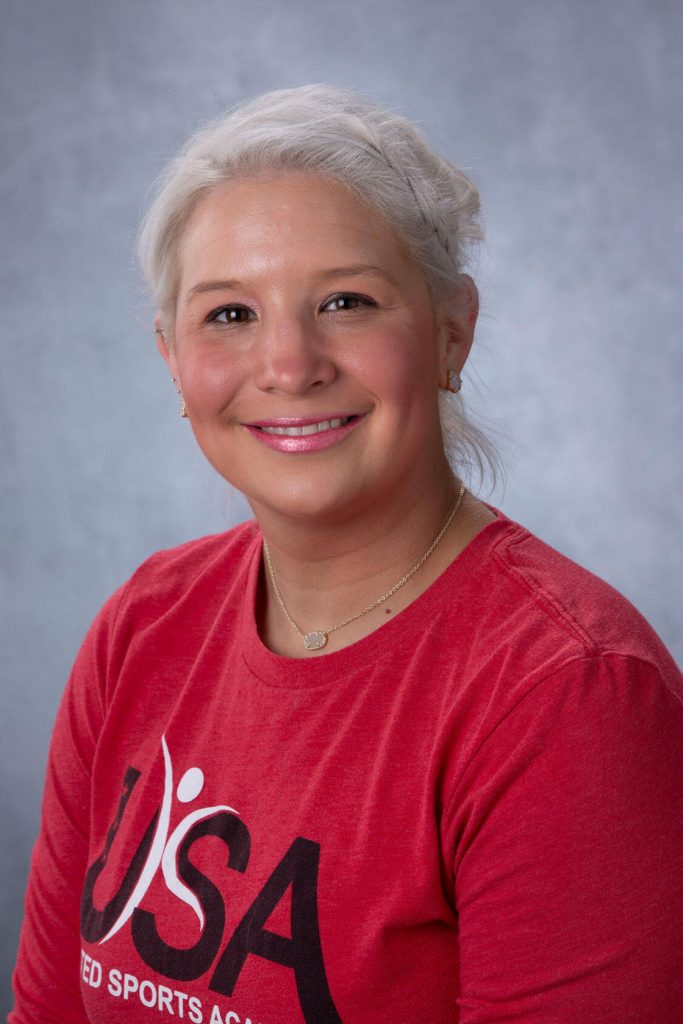 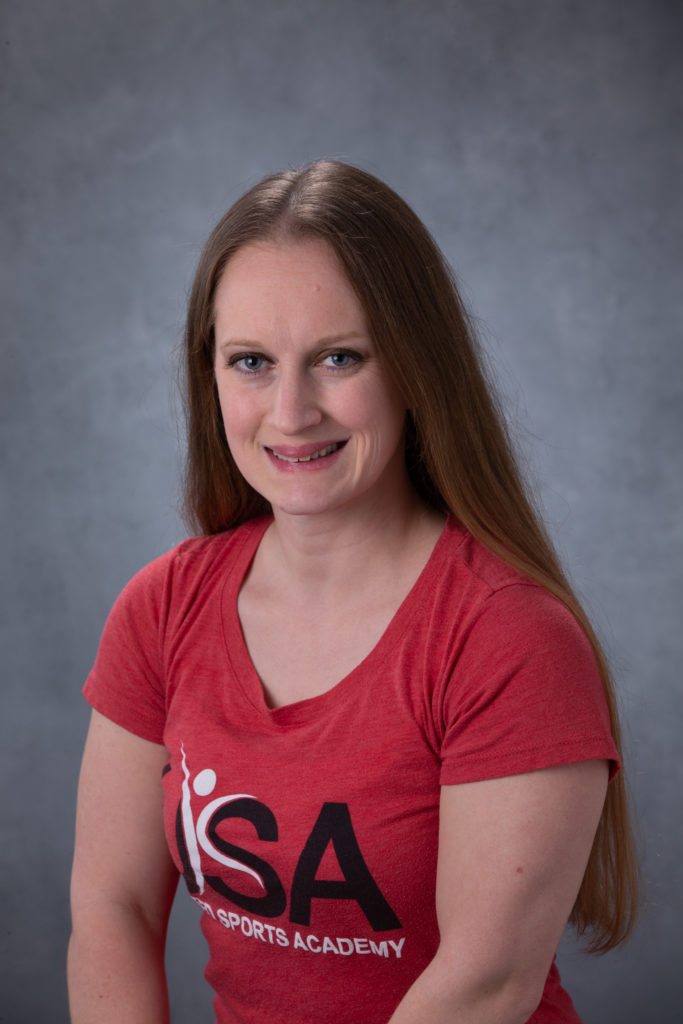 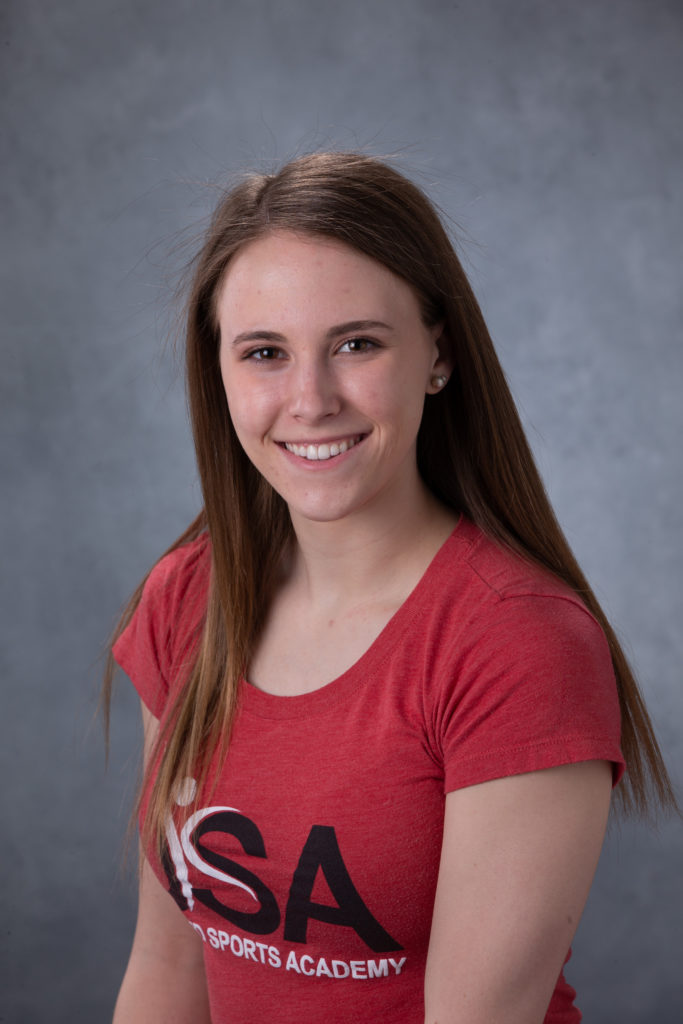 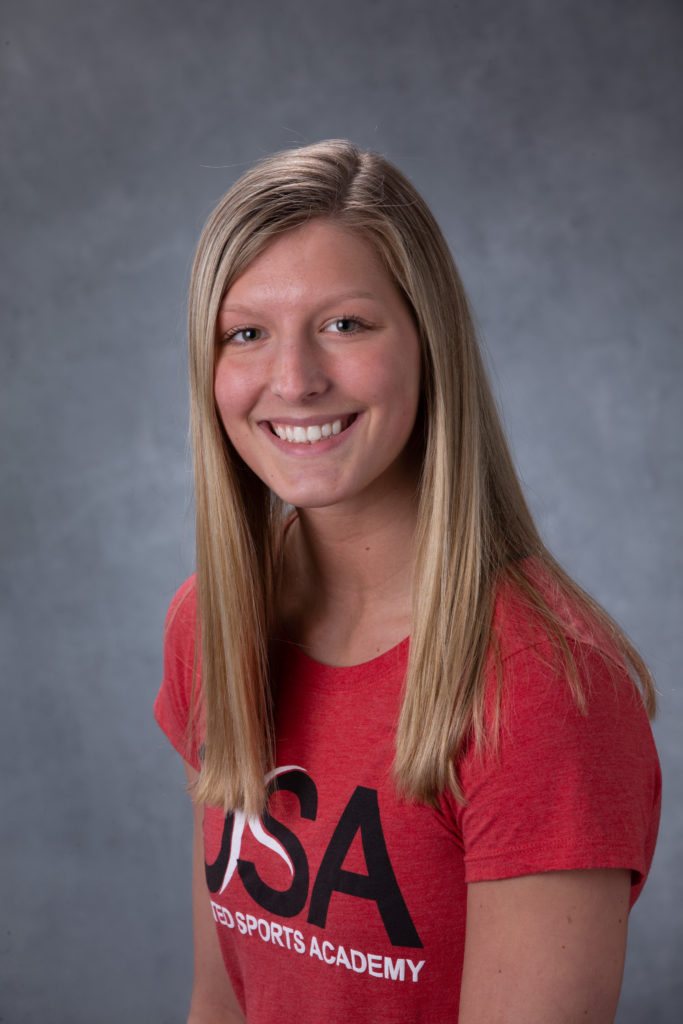 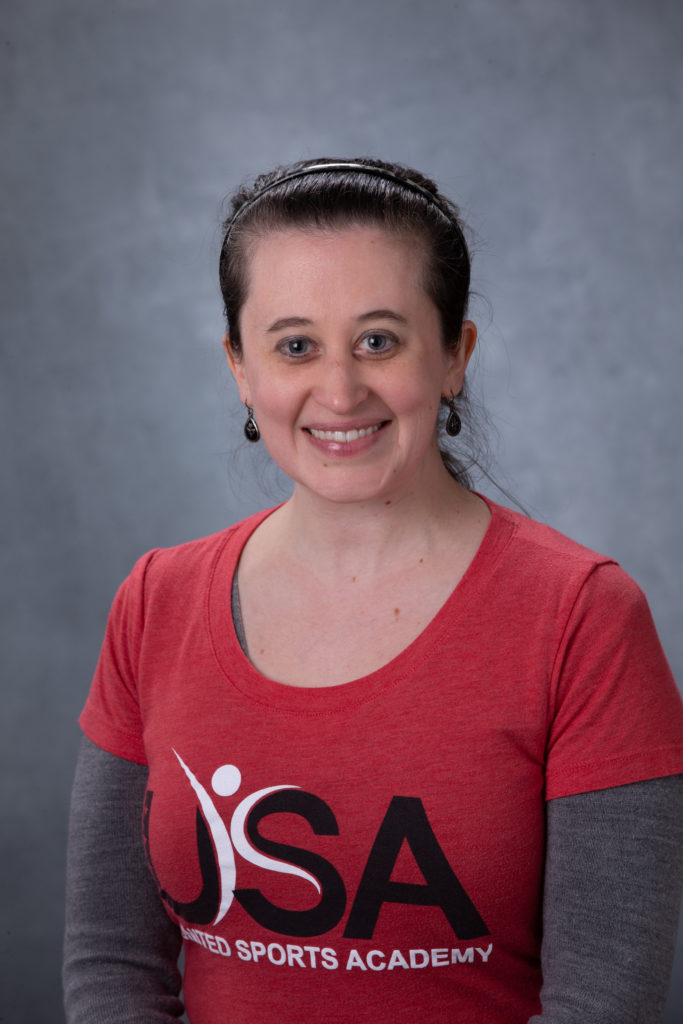 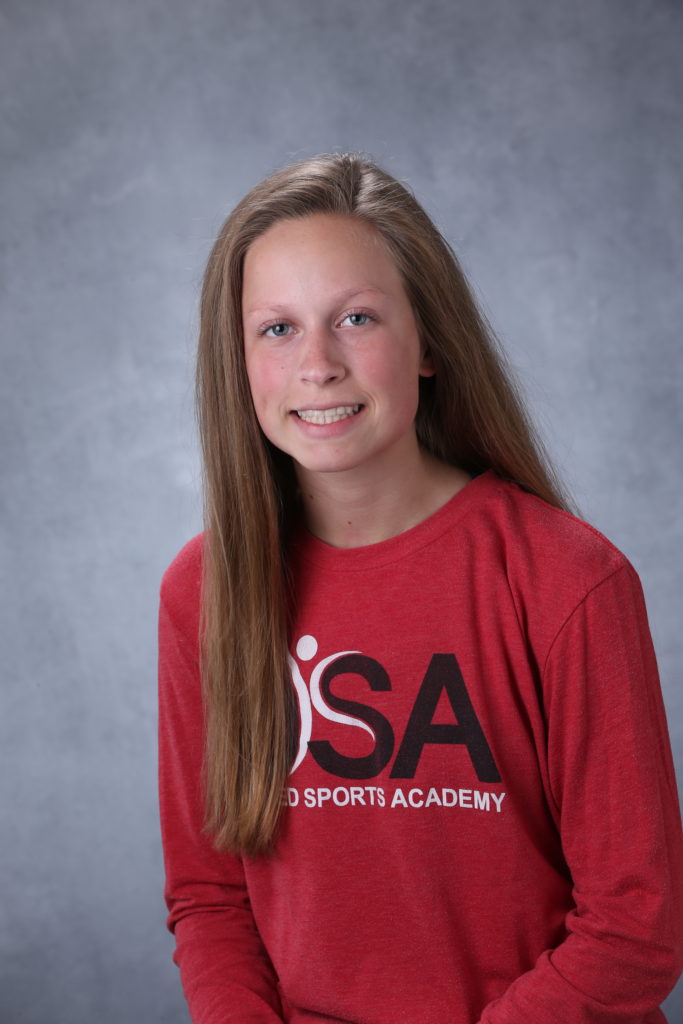 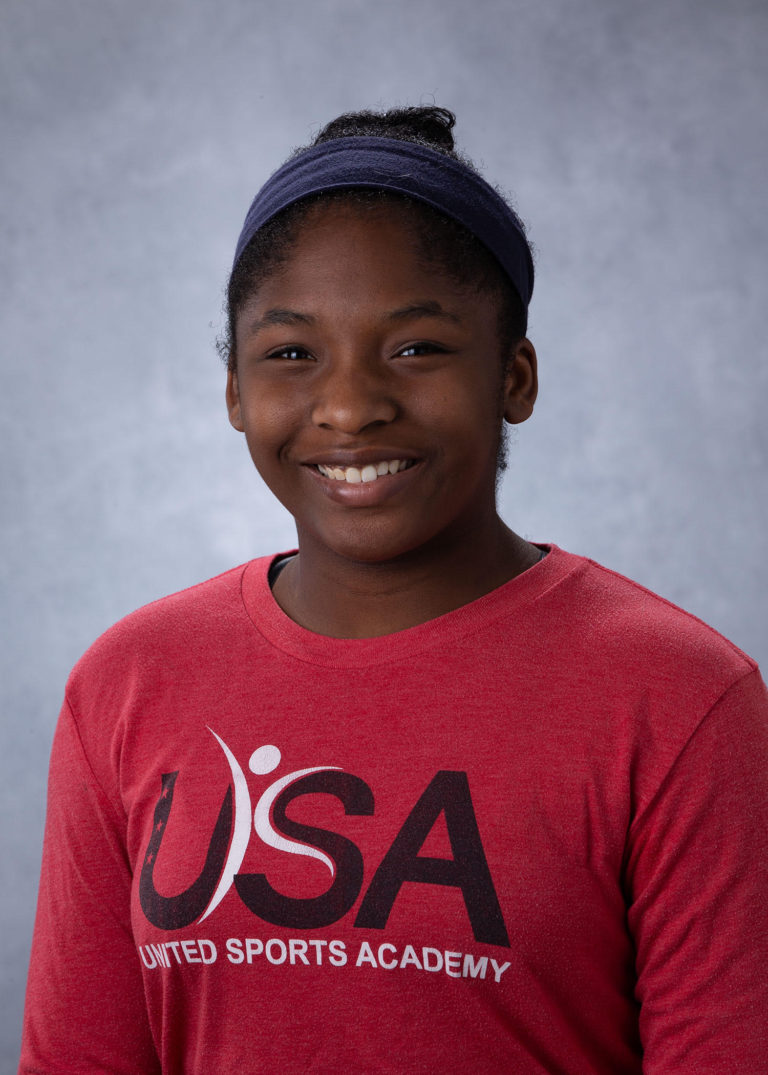 DIMA Raynova is the owner of United Sports Academy and has been involved in gymnastics since 1972. As a Bulgarian National Team member she competed in the 1980 Olympics. Dima holds a Bachelors Degree in Physical Education. For the past 16 years, Dima has coached beginner gymnasts through level 10. With her expertise and help she has developed over 200 state champions, regional medalists, national qualifiers and scholarship recipients Her reputation and love of the sport brought together a strong team of coaches and staff at United Sports Academy. Their combined national and international experience far exceeds any local gymnastics club and is comparable only with the very best in the industry around the world. Dima prides herself on developing a nurturing relationship with each individual gymnast, from when they first step in to the gym, to when they select their college. In 2013, in effort to give back to the community, she and her daughter structured a new non-profit organization called Athletes Caring Together, Inc. The main goal of ACT is to enrich the lives of less fortunate children through sports.

Silvia Topalova is a seasoned veteran in the sport of gymnastics. Aside from being a 2 time Olympian for Bulgeria, Silvia spent many years competing on an International Level appearing numerous times at the World Championships (1978,1979, 1981,1983), Balkan Championships (1981,1982,1985), European Championships (1981,1985) and many other International Competitions. Silvia also received a Silver Medal on Uneven Bars at the 1984 American Cup and finished that competition 5th in the All Around.Since retiring from active competition Silvia has had an equally successful career as a coach. For the past several years Silvia has been coaching in Puerto Rico and in the 2012 London Olympic Games one of Silvia’s gymnasts Lorena Quinones Moreno competed for her home country of Puerto Rico.

Omar Egas is a Competitive Team Coach at USA. He is a former Ecuadorian National and South American Champion. Omar has coached beginner to elite gymnastics for over 20 years. Omar is one of the original team coaches of Keystone Gymnastics, which later became United Sports Academy. He has contributed to the success of several Junior Olympic National qualifiers and Medalists as well as gymnasts who received athletic scholarships to universities such as Rutgers, Michigan St, Temple, Kentucky and Northern Illinois. Omar is also the Meet Director of the Janet Rothenberg Memorial, the largest gymnastics meet in our area boasting almost 1,000 gymnasts in 2014. When not in the gym you might find Omar on the Golf course, perfecting his swing.

Brad Eisele is the Class Program Manager at United Sports Academy. For more then 15 years Brad has been involved in every aspect of the gym. Coach Brad is a Pre-school, Developmental and Tumbling Class Instructor as well Team Coach, Choreographer and Birthday Party Coordinator. Brad coaches the USAIGC Team where he has lead dozens of athletes to numerous PA State Championships, Regional Championships and even USAIGC World Championships. Outside of the gymnastics world Brad spent over 20 years dancing ballet, performing musical theatre as well as Opera. In his off time you can catch Coach Brad singing at weddings, funerals or at area nursing homes. Did you know Coach Brad holds the Disney record for most consecutive times on Rock ‘N’ Rollercoaster (121), or has served as Grand Marshall for Disney Parades and also appeared in Disney’s Hoop Dee Doo Musical Revue? As Coach Brad is famous for saying, Have A Magical Day!

Mia has been involved in the sport of gymnastics for over 30 years. She has played the role of a successful competitive gymnast, class instructor, team coach, program director, and gym manager. Mia has coached a multitude of levels including J.O levels 3-9 and IGC levels copper-gold, culminating in numerous State and Regional Champions as well as a number of National Qualifiers. Currently, Mia is our Team Manager, coaches J.O compulsory groups, and heads our Hot Shots and Future Stars programs.  Mia graduated from Marywood University with a master’s degree in Psychology and also holds a School Psychology certification. Outside of the gym, Mia enjoys yoga, baking, and spending time with her husband and two girls, Antonia and Viviana.

Colleen Cammerota is the part of the office staff as well as an instructor at United Sports Academy.  Originally from Long Island, New York, Colleen started gymnastics at age 3 and became a competitive gymnast.  This led to her involvement in many other sports including competitive cheer.   Because of her gymnastics background, she became a 2 time UCA All Star. In 2004, she graduated from Marywood University with a Bachelors degree in Communications, specializing in Advertising and Public Relations. That same year her passion for gymnastics led her back to the gym and United Sports Academy. For the past 14 years, Colleen has worked at USA in various positions ranging from Office Manager, Employee Relations Manager to Team Coach.   When she is not in the gym Colleen enjoys cooking, yoga and traveling to see family and friends.  Colleen and her husband Nick have 3 kids, Jude, Carter, and Hazel.

EMILIA Raynova is the Director of Operations for United Sports Academy. Prior to her career, she attended the Pennsylvania State University and graduated with a degree in Psychology. Her love for children and sports led her to founding the non-profit organization, Athletes Caring Together, Inc., whose mission is providing life-changing opportunities to children and empowering athletes to make a difference through the sports they love. Emilia is also the owner of Mayfield Sports Complex, a facility that provides various physical fitness activities like skating, golfing, kickboxing, physical fitness classes, etc. On her time off from business management, she enjoys spending her spare time outdoors, volunteering abroad, traveling, hiking, playing with her puppies and spending time with her family and friends.

Kate Healey has been involved with gymnastics for 35 years. As a high school gymnast she competed at the state level for 4 consecutive years. After high school, Ms Kate cheered for the University of Delaware and coached level 4,5 and 6 gymnastics at the local YMCA. Ms Kate has been with United Sports Academy for 10 years; she has coached the rec. team and currently works with our class program. Ms Kate is a 7th grade reading teacher in the North Pocono School District where she resides with her husband and two daughters. She hopes that one day her daughters, Ireland and Kennedy, will share her lifelong passion for gymnastics.

Erik Elliot is a Recreational Gymnastics Instructor. He has been enthusiastically teaching gymnastics for the past 20 years. Erik is one of the original coaches of Keystone Gymnastics, which later became United Sports Academy. He and his wife Carol have 4 daughters, 2 of which were competitive gymnasts. When not in the gym, you can find Erik swimming, skiing, hiking, or biking. Erik loves all outdoor activities and enjoys life to the fullest.

Gianna Muracco has been a recreational gymnastics instructor at United Sports Academy for 9 years. She has been involved with gymnastics from a recreational aspect since she was eight and has continued in the sport in different capacities ever since. Gianna Graduated from Marywood University with a degree in Health and Physical Education and earned her masters of teaching degree at Marywood. Currently, she is a Health and Physical Education teacher in the Dunmore School District, adjunct professor at Johnson College and a board member of Athletes Caring Together, a non-profit organization whose mission is providing life-changing opportunities to children and empowering athletes to make a difference through the sports they love. When she is not teaching, she is usually instructing many Zumba and Spin classes in the area, working out with her friends or doing various outdoor activities. Gianna also is a volunteer for many community events such as Race for the Cure, St. Josephs Festival, and the Annual summer festival at Sherwood Park in Dunmore.

Alexis has been involved in the sport of gymnastics for over 30 years. She was a competitive gymnast from 6 years old to 17 years old. Alexis started teaching gymnastics at the age of 18, and coached a level 5 and 6 compulsory team for several years. Currently, Alexis is our Class Program Manager, a tumble team coach, and teaches classes. Alexis graduated from The University of Scranton with a bachelors degree in Communications and a master’s degree in Human Resources Administration. She was also the Varsity basketball cheerleading coach at Scranton Preparatory School from 2008-2019. Alexis has also been the store manager at Yankee Candle since 2013. Outside of the gym, Alexis enjoys aerial yoga with her mom, and spending time with her husband, Brian and puppy, Brody.

Heather Woloszyn is our preschool program manager. She also teaches recreational gymnastics classes and organizes themes and activities for our summer camps. Heather has 14 years gymnastics teaching experience. She hold a bachelors degree in health and physical education from Marywood University. Outside of the gym she enjoys hockey, crafting, painting, being outdoors and spending time with her family.

Bri Koehnke is a recreational class instructor at United Sports Academy.  She is originally from Lancaster, PA, where she lives with her mom, dad and brother.  Miss Bri spent the majority of her life training and competing in gymnastics, and about 5 years ago she decided to share her love of the sport with other aspiring little gymnasts by becoming a coach at Prestige Gymnastics, the gym she grew up in.  She is currently attending Marywood University and is working on her Bachelor’s Degree in physician assistant.

Outside of school and gym, Miss Bri love to draw, spend time with friends and shop.

Calista Marzolino is a birthday party and recreational instructor. She has been involved in gymnastics and training at USA since she was 18 months old. Calista has been competing on our JO team since she was 6 years old. Ten years later and she is now a Level 10 gymnast. She is a current student at Abington Heights High School with the intention of attending Lehigh University in the fall on an athletic scholarship. Calista also plans on majoring in biology and minoring in business with hopes to get into veterinary medicine.

When Calista is not in the gym training or coaching,  you can catch her on the track or riding horses. She enjoys spending time outdoors and playing with her dogs.

Elissa Loubet is the dance teacher at United Sports Academy. She graduated from Montclair State University with a BFA in Dance. She then owned and operated Cornerstone Dance Conservatory for 8 years. She has choreographed 7 musicals for Hunterdon Central Regional High School. She has danced in NYC Times Square with Project Dance and was the resident choreographer for Stonecrest Community Church’s dance ministry. Her favorite dancer of all time is Gene Kelly. In her spare time she likes to take walks with her husband and son.